Plan a Trip to Celebrate Founder’s Day in Duncan, Oklahoma

It was only going to be for a night.
Having grown up in a small, rural town, my husband, Mike, has a fascination with tractors that can’t easily be sated in our suburban Dallas, Texas, environment. So when he learned that Duncan, Oklahoma, was hosting its annual Founder’s Day Celebration, complete with a parade of tractors, floats and horses down the town’s Main Street, he was in. But, I’m a city girl at heart, and I hoped that Duncan would have enough excitement and charm to keep me entertained, too. We decided to go, although just for one night—but one night in Duncan, we learned, is not enough.

Duncan is just shy of a three-hour drive from Dallas, and when we got into town, it became abundantly obvious as to why Duncan is known as the Crapemyrtle Capital of Oklahoma. Crapemyrtle trees have summer’s showiest blooms, with bright, almost-neon flowers that not only survive but also thrive in the heat. Duncan’s plentiful crapemyrtles were a beautiful welcome to the town.

Fortunately, we arrived at Lindley House Garden Cottages before sunset to take in the English country home’s garden setting. There were patios and a large fountain, with climbing vines providing shade under the pergolas. The inside was just as quaint and just as English. Our spacious room, the Balcony Suite, had both a fireplace and a jetted soaking tub, as well as a sitting area with a sofa and comfortable reading chair.

But there was no time for sitting quite yet.

“Where do you want to go?” Mike asked.

“Wall Street,” I replied, to which he gave me a curious look, as if I somehow thought we were 1,500 miles away in New York City. Quite the contrary: I’d done my research on Duncan before hitting I-35 and knew that the Wall Street Pub, with live music on Fridays and Saturdays, would be a great spot to spend the evening. The quiet, simple, redbrick building was clearly a facade. Inside, the pub was lively and welcoming. Any space on the exposed brick walls not covered by old signs was signed by the many music acts that had played there. The beer was cold, the music was hot and the crowd was friendly. We were off to a great start in Duncan.

After a delectable breakfast at the Lindley House the next morning, we headed to nearby Main Street, where Founder’s Day was about to begin. As crowds lined the charming downtown street, the parade of green, red and orange tractors, some old, some new, made their way down the street, intermixed with floats, cars and horses. As an old red tractor passed by, I sensed my husband’s nostalgic yearning.

We continued the celebration by visiting the outdoor food trucks, the artisan vendors scattered about Fuqua Park for the art walk, an Old West-style melodrama, great live music and the Founder’s Day Queen Event at the Stephens County Historical Museum. The treasures on display there piqued our interest, but there was so much to do before we had to hit the road for Dallas, such as heading over to the W.T. Foreman Prairie House Historic Site for a tour of the restored 100-year-old Frank Lloyd Wright-inspired home.

Extending the excitement
We had planned to head home after taking the half-hour Foreman Prairie House tour, but Mike and I looked at each other and decided we had so much more to see in Duncan. We weren’t ready to leave.

“And I’ll call the dog sitter,” I said. Five minutes later, our one night in Duncan became a long weekend.

First on our agenda was getting back to the Stephens County Historical Museum. We’d had just a peek, but now we wanted to dive in and explore the many artifacts on display, including memorabilia from Halliburton, which was the county’s largest employer at one time. The museum gave us a glimpse of life how it used to be, and the birth announcement for actor and director Ron Howard, born in Duncan, gave us both a chuckle.

For another look at history, we headed to the Rock Island 905 Museum, which features an old steam locomotive, as well as a replica 1892 train depot with models and all things “train” on display. I saw Mike’s eyes light up as we perused the museum and wondered if his tractor fascination would spill over into trains. 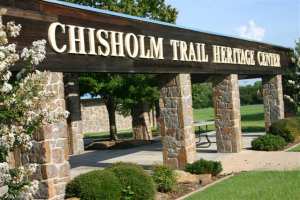 Some of the nation’s finest Western and Native American art is on display inside the Chisholm Trail Heritage Center. The life-size cattle drive sculpture outside the museum was awe-inspiring, as was the interactive cattle drive film shown inside the theater, where we felt the wind, the roar of hooves and even the mist of the rain just as the cowboys did.

“I can’t believe we almost missed this,” Mike said. He didn’t even change his tune when I made him put on a cowboy hat and grab a lasso to take a photo in the interactive Kidzone.

Sweet treats and musical feats
Our last day in Duncan began at Viridian Coffee, a popular coffee house where owners Lindsay and Shay Hayes offer the only locally roasted coffee in Southwest Oklahoma, in addition to delicious, house-baked goods. I devoured a rich and delicious caramel apple scone while Mike opted for his favorite sweet treat—coconut cream pie—no matter that it was only 10 in the morning.

As we explored the historic Main Street district, we were treated to the Historic Stepping Stone Trail, where bits of the city’s past are presented in words and renderings on stepping-stones. We made sure to shift our gaze upward once we arrived at the iconic Rhythm and Routes mural, a homage to Duncan-born musician Hoyt Axton and to Elvis Presley’s hit song, “Heartbreak Hotel”. Turns out Hoyt’s mom, Mae Boren Axton, wrote the Elvis Presley hit on a napkin in the lobby of the building (a former hotel) on which the mural was painted.

Shop ‘til you drop
Because no weekend getaway is complete without a little retail therapy, we decided to cap off our Duncan trip by shopping some of the many boutiques and other stores the town had to offer. Distinctive Decor on Main Street features an amazing array of products for the home, and even some great gift items such as lotions, jewelry, sweet treats and Oklahoma-themed souvenirs. It was an awesome store—the type of place I could get lost in for hours. I couldn’t leave without purchasing an Oklahoma state flour sack dishtowel, a great little reminder of our weekend away.

Off Highway 81, the road we needed to take to head back toward Dallas, we popped into the Ginger Jar of Duncan, a hidden gem that’s been selling gifts and home decor for 30 years. I’ll take one of each, I thought upon walking in the door of the boutique. I found not only great gift items, but cute clothes and accessories, as well. The store felt warm and inviting, much like all we had experienced in Duncan during this long and unexpected weekend.

Yes, it was only supposed to be for one night, but boy am I glad it turned into a whole weekend.

Plan your getaway to Duncan, Oklahoma.