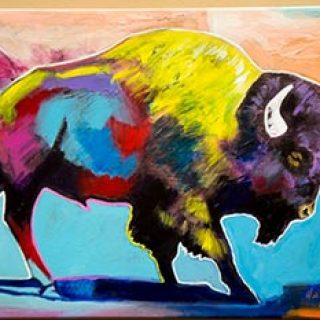 “Looking Through Indian Eyes” by Brent Learned will be featured at the Chisholm Trail Heritage Center in Duncan, Oklahoma. If there is one thing Learned wants people to take away after seeing his art, it is that Native Americans still exist and have stories to tell. He doesn’t want people to go to a museum to just see the past history, but also the current and future. “You’ve got to know your history to know where we’re going.”

Learned’s one of a handful of Native American artists who are putting their story of Plains Indians onto canvas with a colorful pop art and sometimes satirical spin. He is a member of the Cheyenne and Arapaho Tribes of Oklahoma. He also draws and sculpts, but has attracted a following because of his vivid paintings and subject matter.