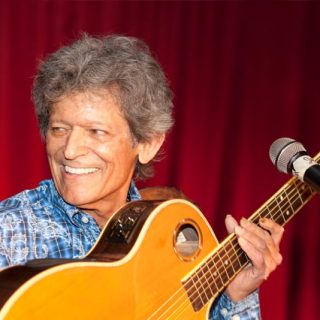 Through the years, Johnny Rodriguez has risen from the rural lifestyle of Sabinal to the top of the country music world!

His debut album, Introducing Johnny Rodriguez to the world of Country Music, went to #1 on all three major trade charts and by 1973 he was nominated by the Country Music Association for “Male Vocalist of the Year” and won the Billboard Trend Setter Award for being the first Mexican-American to capture a national audience. Some of Johnny’s classic hits during this period included “Pass Me By”, “You Always Come Back (To Hurting Me)”, “Riding My Thumb to Mexico”, “That’s The Way Love Goes” and “Just Get Up And Close The Door”. In the past 40 years, Johnny has released 35 albums and charted 45 singles, including 16 #1 hits!

This favored son of Texas has received standing ovations by audiences ranging from Ryman Auditorium to Carnegie Hall and has been honored with the presence of Presidents of the United States including Jimmy Carter and Bill Clinton and playing the Inaugural Ball for George Bush. He is also a member of the Texas Country Music Hall of Fame.