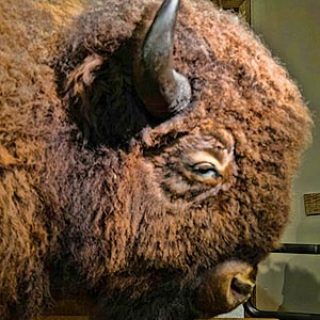 DUNCAN, Okla. – A nationally touring exhibit “Bison: Ancient. Massive. Wild.” continues to be open daily, through Sunday, July 28, at the Chisholm Trail Heritage Center in Duncan, OK. This exhibit explores the significance of the bison from pre-history, to their relationship with the Plains Indians, near extinction, and current iconic status.

As you visit this exhibit, you’ll explore the significance of bison in the cultures of Plains Indian peoples – particularly as a resource for food, clothing, shelter and tools. Bison is a North American species whose story stretches from Plains Indian hunters to entrepreneurial industrialists to dedicated conservationists to today’s producers and enthusiasts.

You’ll also learn the difference between the species of buffalo and bison. Explore how the name “buffalo” became common, which involves quite a few theories. The American bison has been called a “buffalo” for more than 200 years.

Several pieces of historic bison art will also be on display in CTHC’s Garis Gallery of the American West. Head on down the road this summer to see Bison: Ancient. Massive. Wild., the exhibit, May 24 to July 28, 2019. Also on exhibit this summer, Oklahoma artist Sandy Magrath: Dogs of the Southwest paintings, May 1 – June 30; and Texas artist Larry Lemons, July 4-Sept. 22. Be sure to visit us on National Day of the Cowboy, Saturday, July 27. It’s free admission on that day, 10 a.m. to 5 p.m.